Less mystery, more character and all the wild, ridiculous fun you need 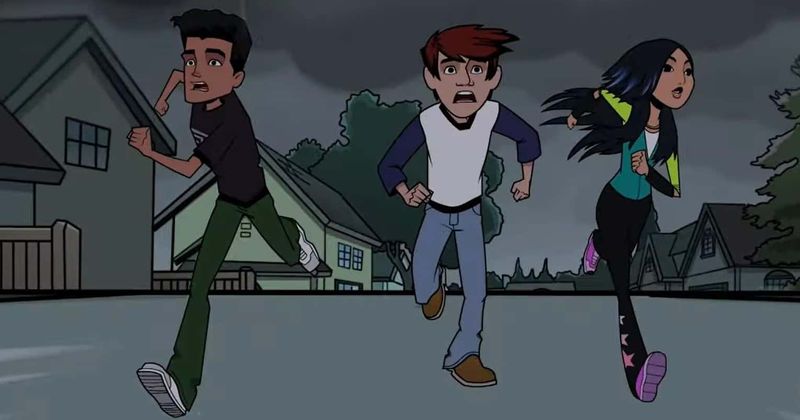 Spoilers for ‘The Hollow’ Season 2

Season 1 of ‘The Hollow’ was strange – possibly too strange. It was obviously meant to be, but the mystery had a tendency to overshadow any fun that could have been had from the series. There was a sense of uneasiness that kept anything from being too comfortable, and while again, that was obviously by design, by the time you got to really enjoy the characters and the humor of the series, it was almost over.

Season 2 approaches things from a different angle – you know what’s going on, even if all the rules have somehow changed. It makes all the difference in the (virtual) world.

Waking up to find himself in the animated world of The Hollow once again, Adam (Adrian Petriw) is wondering just what’s going on. Soon joined by Mira (Ashleigh Ball) and Kai (Connor Parnall), they discover that while they’re living in what seems to be their home, the retain all memories of their time in the Hollow, and their life inside it. It’s not long before they’re attacked by bizarre creatures and their own fears, and finding portals to vastly different settings that’s a gamer’s dream all come to life.

With the premise revealed last season, it’s a lot easier to sit back and enjoy the adventure as it progresses. There’s a lot more character development, to, as the characters have all their memories returned to them. The backstory that they were robbed of in Season 1 gives whole new layers to their personality. Adding to the fun is the inclusion of the team’s former rivals, Reeve (Alex Barima), Vanessa (Diana Kaarina), and Skeet (Jesse Moss).

Trying to figure out the Hollow’s new rules, the team is forced to band together, and the new dynamic really highlights just how good the writing is.

Each character has a unique personality without being reduced to a single comedic trait, as tends to happen in a lot of animated series. They’re flawed in ways that make for inter-party antagonism, especially between Adam and Reed. A good test of how well characters are written and brought to life is if they’d be entertaining in completely normal circumstances, and the kids trapped in the Hollow pass that test with flying colors.

That’s not to say that the show’s weird circumstances in their own right. Familiar faces gain new roles as the game resets, and we see new scenarios, unique challenges, and hilarious new characters that last just long enough to make an impression before the show moves on to the next weird, fun, and exciting thing. The Hollow is a setting like none other, and with the surprising existentialist twist introduced this season, further seasons are going to be a very interesting exploration of just what makes the world tick.

‘The Hollow’ Season 2 feels like what Season 1 ought to have been – a fun ride through wildly entertaining challenges, with a mystery just deep enough to keep you hooked without distracting from the show’s charismatic protagonists. It’s a well-balanced season and is hopefully not the last we’ve seen of the Hollow’s adventures.

Season 2 of ‘The Hollow’ is available to stream on Netflix now.